This is my review of The Moon Hunters by Anya Pavelle.

Ms Pavelle contacted me on social media after I posted that I would be happy to do reviewing for indie authors. I was sent a PDF copy of the book to review. The Moon Hunters was published in September 2019 by Chandra Press. 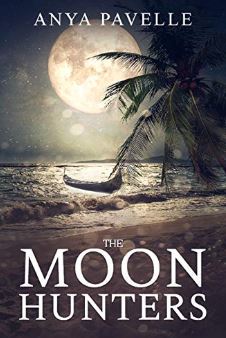 The Pestilence sweeps the globe with terrifying speed. A group of survivors finds an island sanctuary.

Three generations later, no one has heard from the outside world in years. The old radio only crackles with static. The Pestilence either finished its job or the world tore itself apart.

In the Village of Lehom, Leilani has been called to court as a Virtue by the King. Going to court means losing her independence and self-respect. Unfortunately, she doesn’t have a choice.

Leilani decides to take a stand; the King be damned. She plans a daring escape and sets in motion a series of events that will shake the foundation of her village and the island to its core.

Other reviewers are correct – Ms Pavelle’s world-building is wonderful. Creating a self-contained dystopian world within the confines of modern-era Earth, there are similarities and differences present – though it’s very easy to understand how Ms Pavelle’s world formed as it did. There’s a little background (though I would have liked more, to be honest) on who first came to the island and when, how religions were started and what they’re based on, how the residents needs are maintained. The addition of the library was an excellent step, though possibly required to explain where some of the terms come from (shellacked, for instance).

I enjoyed the format – Leilani telling a survivor story to a doctor of a ship in the Old World. The history itself was intriguing, compelling, and clearly shows that escaping the ‘worst’ of humanity doesn’t mean you’ve escaped it fully. The formation of the new religion, instigated by drug-addled hallucination, again proves that man’s arrogance, selfishness, and hubris leads to his destruction.

I also liked the distinctions of the three separate villages in The Moon Hunters, each with different beliefs but all adhering to a joint and coordinated effort to survive on the island. Although tradition rules ‘here’, doesn’t mean it rules ‘there’ – though a little more detail on the differences would have been appreciated.

The characters are well-fleshed and, though the dialogue is a little more formal than expected if the Pestilence happened in modern times, the character interactions, expectations and desires are completely relatable. We all know a Leilani, a King and Queen – and we all hope to find a Jenay.

I recommend this one if you’re up for a good dystopian fantasy, if new worlds are your thing.  Indeed, I’d like to go further – I want to know what happens to Leilani, what happens to the island communities…  Ms Pavelle’s left me wanting more! Roll on Moon Hunters II!

Anya Pavelle was born in Massachusetts but eventually settled in Florida, where she currently lives with her husband and dog. She’s a trained art historian who sees the quiet beauty in nature, art, and literature. Anya has been imagining new worlds since she was six years old and like many morbidly curious people, she’s obsessed with dystopian literature. The Moon Hunters is her first foray into science fiction. She’s currently working on the sequel and also plans on writing a prequel. In addition to writing, Anya loves travelling the world, SCUBA diving, relaxing with her friends and family, and finally, curling up with a new book and a glass of wine on a moon-lit humid night.

Sincere thanks to Ms Pavelle for sending me a copy of her work.

4 Responses to “Book Review: The Moon Hunters by Anya Pavelle”