This review of Counterpoint by Michelle Cook comes courtesy of a Blog Tour organised by Rachel’s Random Resources. Counterpoint is self-published and was first released on 31 August 2022. I received a free copy of the ebook. 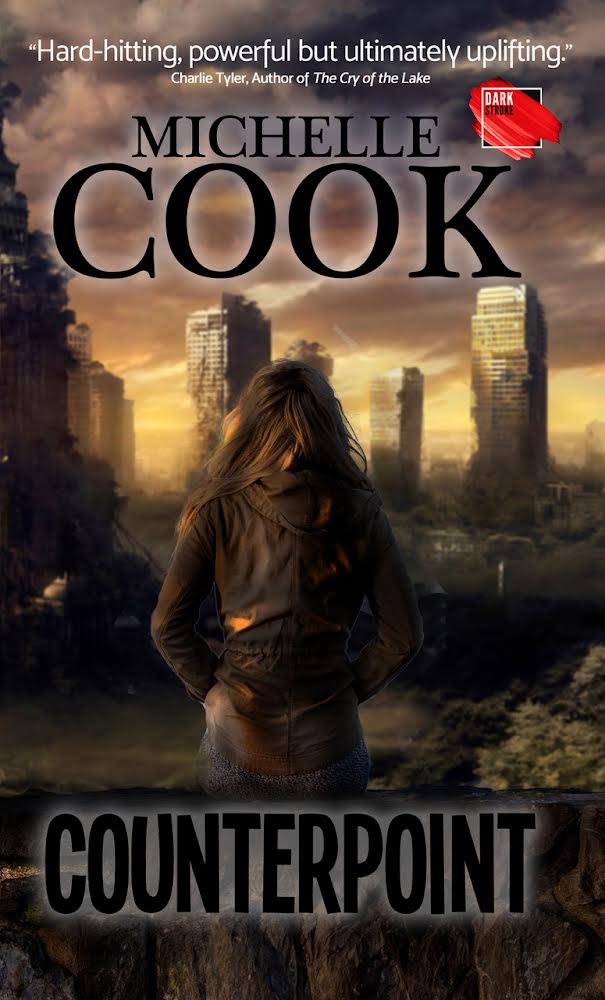 It’s 31st October 2041 in England. On her twenty-fifth birthday, Essie Glass still grieves for her family, killed by a terrorist bomb when she was just sixteen. The signs of humanity and climate in decline are everywhere. Roads and communities crumble, floods and fires blight the landscape, and the sea reclaims the islands of the world. Unconcerned, the government tightens its grip on power with brazen propaganda and brutality.

Still, Essie has built a good life with Seth and their four-year-old daughter, Willow. If only she wasn’t haunted by the events of six years ago, when Alex Langford, corrupt businessman-turned-Prime Minister, tried to kill her to conceal his conspiracy to suppress climate-saving technology.

Essie takes solace in her secret plot to build a new prototype. When tricked into revealing the scheme to powerful enemies, she is forced to abandon her cherished family and run for her life. Her flight drives her into the heart of a resistance movement she never knew existed.

Among the chaos, and in mortal danger, will Essie finally find hope for the future?

While Counterpoint’s story is right up my street – climate change leading to drastic circumstances around the globe and the UK turning into a totalitarian state – I think I would have got more out of this if I’d read the first book.  Though the author has included a helpful prologue covering the events of book one, I found myself flicking back to it to check who people were and how they’re involved.

Counterpoint projects a terrifyingly possible near-future. Realistic and authentic, Counterpoint gives us a glimpse of what could be. And soon.

The story is told through the eyes of our heroes, Essie and Seth, and major antagonist, Kerry, with each providing alternating chapters.

Essie, to me, is a bit of a mix. She’s definitely strong in will and temperament, she can take whatever you dish out. But she seems naïve in some parts, too trusting in others. Seth’s still a bit of a mystery. I think he could have been expanded far more, but perhaps this happened in book one.

Kerry, though, is a really wonderful villain. A little sadistic, vengeful, and completely untrustworthy, she decides that it IS possible to get rich while saving the world and sets her blinding ambition and limited morals to the task. The sadistically gleeful glint in her eye clearly comes across on the page.

The pace is brilliant. On the run and being actively hunted by the state, the short sentence style brings tension and fear to both Essie’s and Seth’s stories. No spoilers, but readers should be aware of scenes of violence, torture and striking a child.

My biggest point is that I found that the character’s speech, dialogue and even POV sounded very similar – making hard for me to see them as completely separate characters. Definitely pulled me out of the story a bit.

That said, Counterpoint almost made me read it quickly – I desperately needed to know!

If you’re looking for an absorbing dash through a scarily possible near-future, Counterpoint should be a first stop. 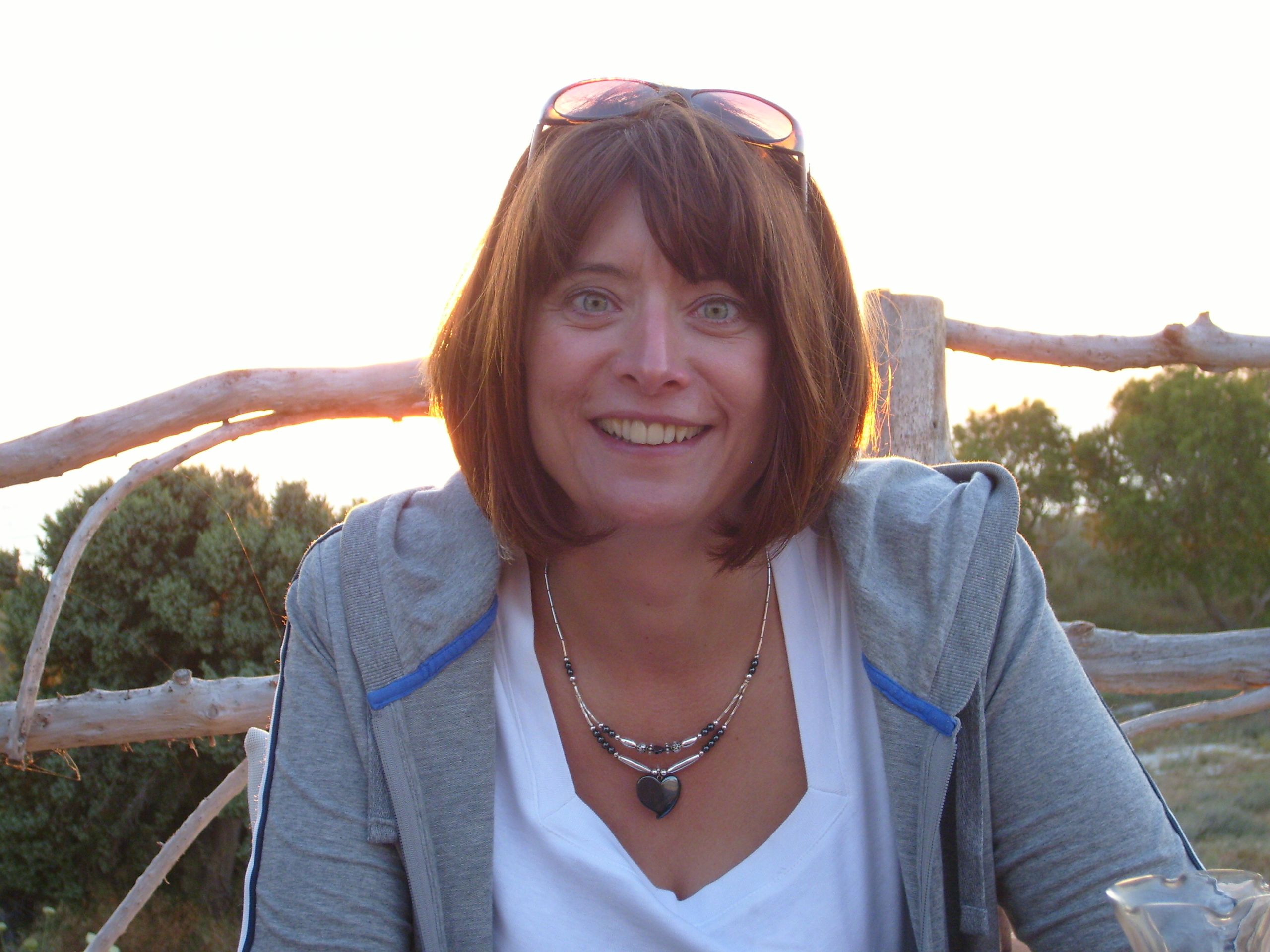 Michelle Cook writes thrillers and dystopian fiction. She lives in Worcestershire, UK with her husband and their two young children.

Her first joyful steps into creative writing were at the age of ten, when the teacher read out her short story in class. A slapstick tale of two talking kangaroos breaking out of a zoo, the work was sadly lost to history. Still, Michelle never forgot the buzz of others enjoying her words.

More recently, she has had several flash pieces published, was longlisted for the Cambridge Prize for flash fiction, and placed first in the Writers’ Forum competition with her short story The Truth About Cherry House. Her debut novel, Tipping Point, was a finalist in the 2022 Page Turner Awards.

Counterpoint, the sequel to Tipping Point, is her second novel. 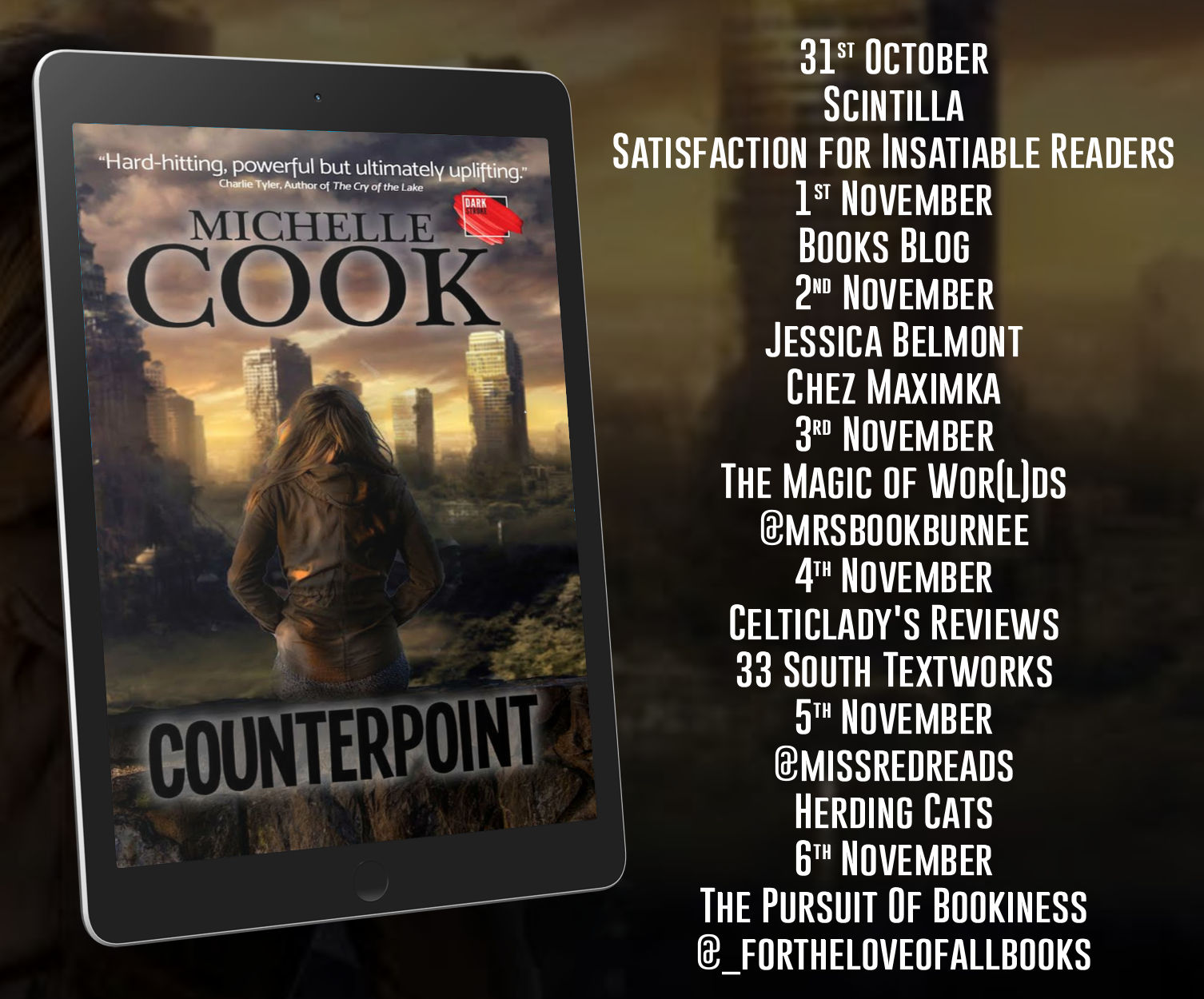