This review of Cold as Hell by Lilja Sigurðardóttir comes courtesy of a Blog Tour organised by Random Things. Cold as Hell is published by Orenda Books on 28 October 2021. I received a free copy of the ebook to review. 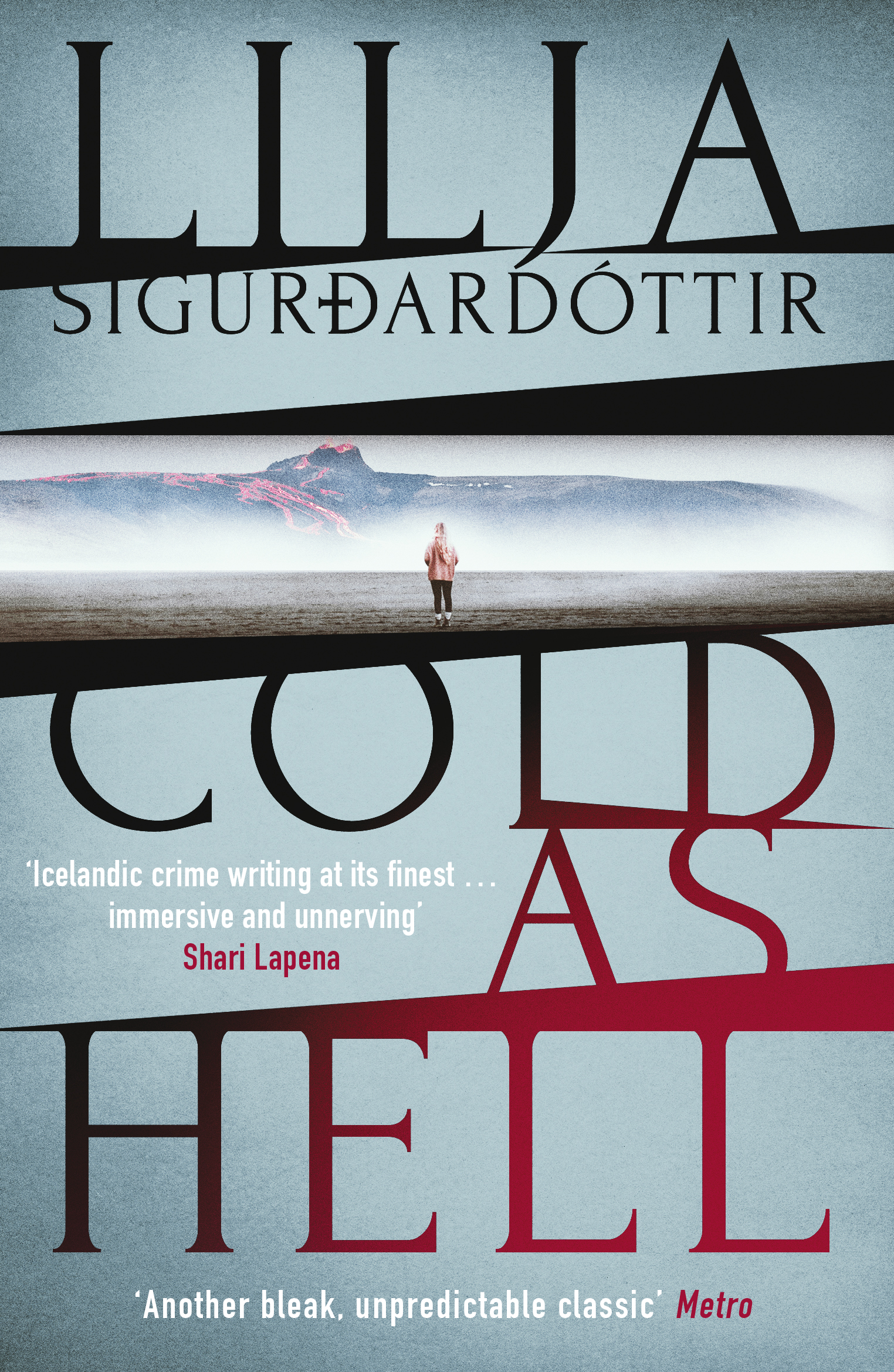 With rights sold in 14 countries, Cold as Hell is the first in the riveting, atmospheric and beautifully plotted five-book series An Áróra Investigation, from one of Iceland’s bestselling crime writers.

Estranged sisters Áróra and Ísafold live in different countries, and are not on speaking terms. When their mother loses contact with Ísafold, Áróra reluctantly returns to Iceland to look for her. But she soon realizes that her sister isn’t avoiding her … she has disappeared, without a trace.

As she confronts Ísafold’s abusive, drug-dealing boyfriend Björn, and begins to probe her sister’s reclusive neighbours – who have their own reasons for staying out of sight – Áróra is drawn into an ever-darker web of intrigue and manipulation.

Baffled by the conflicting details of her sister’s life, and blinded by the shiveringly bright midnight sun of the Icelandic summer, Áróra enlists the help of police officer Daníel, to help her track her sister’s movements, and tail Björn. But she isn’t the only one watching…

I signed up to this tour after my first experience with Icelandi-noir, Girls Who Lie, which got 4 stars from me. This one is quite different, but equally powerful.

To Áróra, Ísafold’s scatty, makes bad decisions and is constantly getting into trouble – which Áróra usually has to solve. So much so, that Áróra had pretty well given up & refused to rescue her any longer. But now Ísafold, seems to have disappeared. No one’s seen her for weeks and mother is desperately worried. So, dutiful daughter, Áróra, leaves her home in Scotland to travel to Iceland and find her wayward sister.

What follows is a spine chilling tiptoe through Icelandic summer, the barren lava fields and midnight sun only adding to the tension.

There are quite a few tales in this one. And though I’m not sure exactly that all of them add to the story as a whole , they all sent little chills down my spine… And I definitely don’t want to go anywhere near Ísafold’s apartment block! It seems to be a magnet for trouble.

I did have a few issues. Though the translation was excellent (well done, Quentin!), the plot jumped into things that (to my mind) the reader should already know – like how Áróra’s business works. A little more detail here would have been appreciated. Also, the ending didn’t resolve things properly for me. Yes, it did leave me hanging for book two, but some characters didn’t resolve at all. (Perhaps characters return in later books?)

Last point, part of the book is told through flashbacks, almost like diary entries, and at times it’s difficult to discern who’s writing them.

All up, I really enjoyed the twists and turns of Cold as Hell. I was unnerved and found myself biting my nails in parts (a habit I broke decades ago), and found myself as chilled as summer in Iceland!

Icelandi-noir is now firmly in my list of favourite genres. 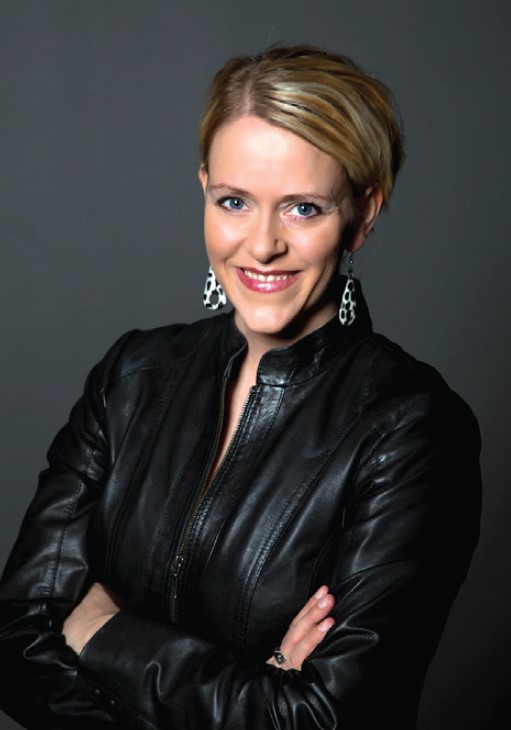 Icelandic crime-writer Lilja Sigurðardóttir was born in the town of Akranes in 1972 and raised in Mexico, Sweden, Spain and Iceland.

An award-winning playwright, Lilja has written four crime novels, with Snare, her English debut shortlisting for the CWA International Dagger and hitting bestseller lists worldwide. Trap soon followed suit, with the third in the trilogy Cage winning the Best Icelandic Crime Novel of the Year, and was a Guardian Book of the Year. Lilja’s standalone Betrayal, was shortlisted for the Glass Key Award for Best Nordic Crime Novel. The film rights have been bought by Palomar Pictures in California. Lilja is also an award-winning screenwriter in her native Iceland.

She lives in Reykjavík with her partner. 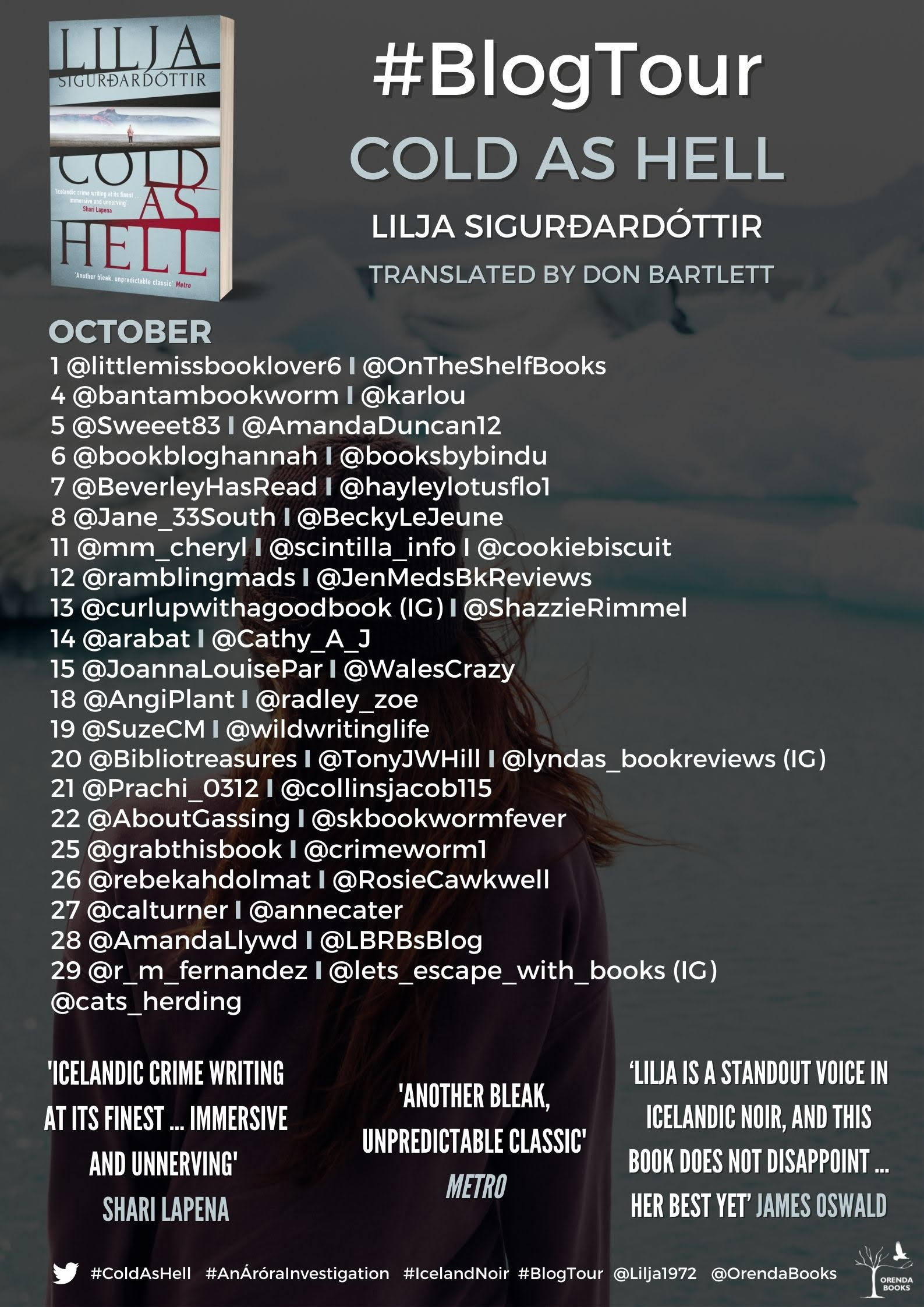 One Response to “Book Review: Cold as Hell by Lilja Sigurðardóttir”