They thought the Sturm were dead. They were wrong. 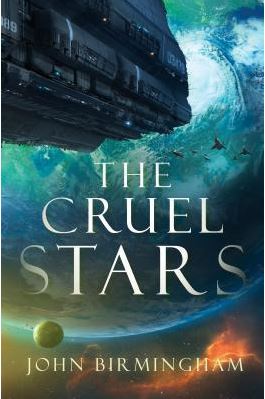 Centuries after their defeat, the enemy has returned with an overwhelming attack on the fringes of human space. On the brink of annihilation, humankind’s only hope is a few brave souls who survived the initial onslaught: Commander Lucinda Hardy, commander of the Royal Armadalen Navy’s only surviving warship; Booker3, a soldier of Earth, sentenced to die for treason; Alessia, a young royal forced to flee when her home planet is overrun and her entire family executed; Sephina L’trel, the leader of an outlaw band.

And, finally, retired Admiral Frazer McLennan, the infamous hero of the first war with the Sturm, who hopes to rout his old foes once and for all – or die trying.

These five flawed, reluctant heroes must band together to prevail against a relentless enemy and near-impossible odds. For if they fail, the future itself is doomed.

I’m a scifi fan. Have been forever, and probably always will be.

I’m also a John Birmingham fan from way back. Author of the seminal 80s Aussie house-share classic, He Died With A Falafel In His Hand, I’ve known John’s work for a long time. So when I saw this, needless to say I jumped on it.

Have to say, the first quarter of the book is quite confusing.

There are 5 main characters and the first quarter is all from their POVs, jumping about like a bit of a mad thing. But once it settles down, the characters are relatable and believable. And even made me giggle in places!

The other confusing thing is that, in this world, you can download your consciousness to another ‘shell’, be it a cloned body, a donated body, or mechanoid. Essentially, people can live forever – if their shell ages, just download to a new one.  It’s called relifing, and there’s lots of talk about how many lives characters have had, how many lives before they’re useful etc.

The enemy is a good premise – the Sturm are ‘pure humans’ with no relifing, no implants etc. And they’re wanting to destroy anyone who isn’t.

So, for the first quarter of the book, things are a little confusing as various backstories are setup, worlds are built and character groundwork laid. Then, it’s like a cross between Firefly and the Honor Harrington series, and the Sturm are a little bit Borg. That said, I did enjoy the story. It took me a while to get through as the first quarter just drained my energy, but the remaining 3 quarters flew by.

The finale, however… Yes, it’s a setup for the next book and yes, it’s got to get everyone together for a common cause. But it was all just a little too convenient. Disbelief was not suspended.

Not sure yet if I’ll be getting the remainder of the series. Going to digest this one for a bit.