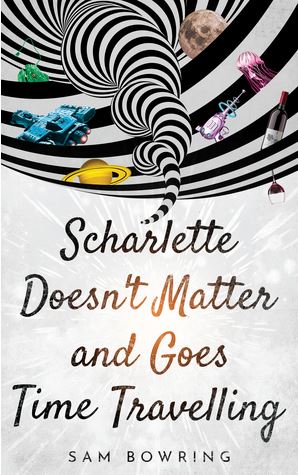 Ever since Scharlette’s parents gave her a name no one can really pronounce, she’s been stuck in a bit of a rut. She hates her job in airport security, making people take their belts off before they fly to exotic locations she can only dream about. She owns a small apartment with large repayments, drinks bargain bin red while she watches Star Trek, and misses her little sister, lost to an exploding sandwich press ten years ago.

Scharlette fears she might live out her entire existence without doing anything or mattering to anyone. It still comes as quite a surprise when a handsome time traveller named Tomothy appears out of nowhere and verifies she is correct – that, according to his records, she doesn’t matter at all.

Scharlette isn’t sure this news is as wonderful as Tomothy seems to think but, as he explains, since her life was to have no impact on the timeline whatsoever, Scharlette is free to travel time and space, and have amazing adventures with heedless abandon.

Scharlette’s a bit of an everywoman – she’s fully relatable. Cheap wine, job she hates, expensive rent payments, and having absolutely no impact on the world whatsoever. She’s a little untidy, a little overweight, doesn’t take care of herself, lacks motivation and… could really, at times, be me. (Except for the difficult-to-pronounce name, of course.)

The premise is excellent – that there are time-travelling agents in the future, protecting future events by protecting the past. Very TimeCop, quite Terminator; we all understand this one. However, no agents yet have a female time-ship called Gordon! Gordon’s got to be my favourite character – with her own foibles, prejudices and sense of morals, she’s as fleshed as any biped.

Bowring is a comedian, and comedy gold is evident in spades. Shrugging at SciFi that takes itself too seriously, Bowring brings a wonderful sense of the realistically absurd to this novel. It flows like the Nile, runs rampant over realism, thumbs its nose at convention, and even stomps on reality itself.

This novel is a romp in every sense, and Scharlette discovers that not mattering can be the best thing ever.

I’m hoping this becomes a series. I could read more of these.