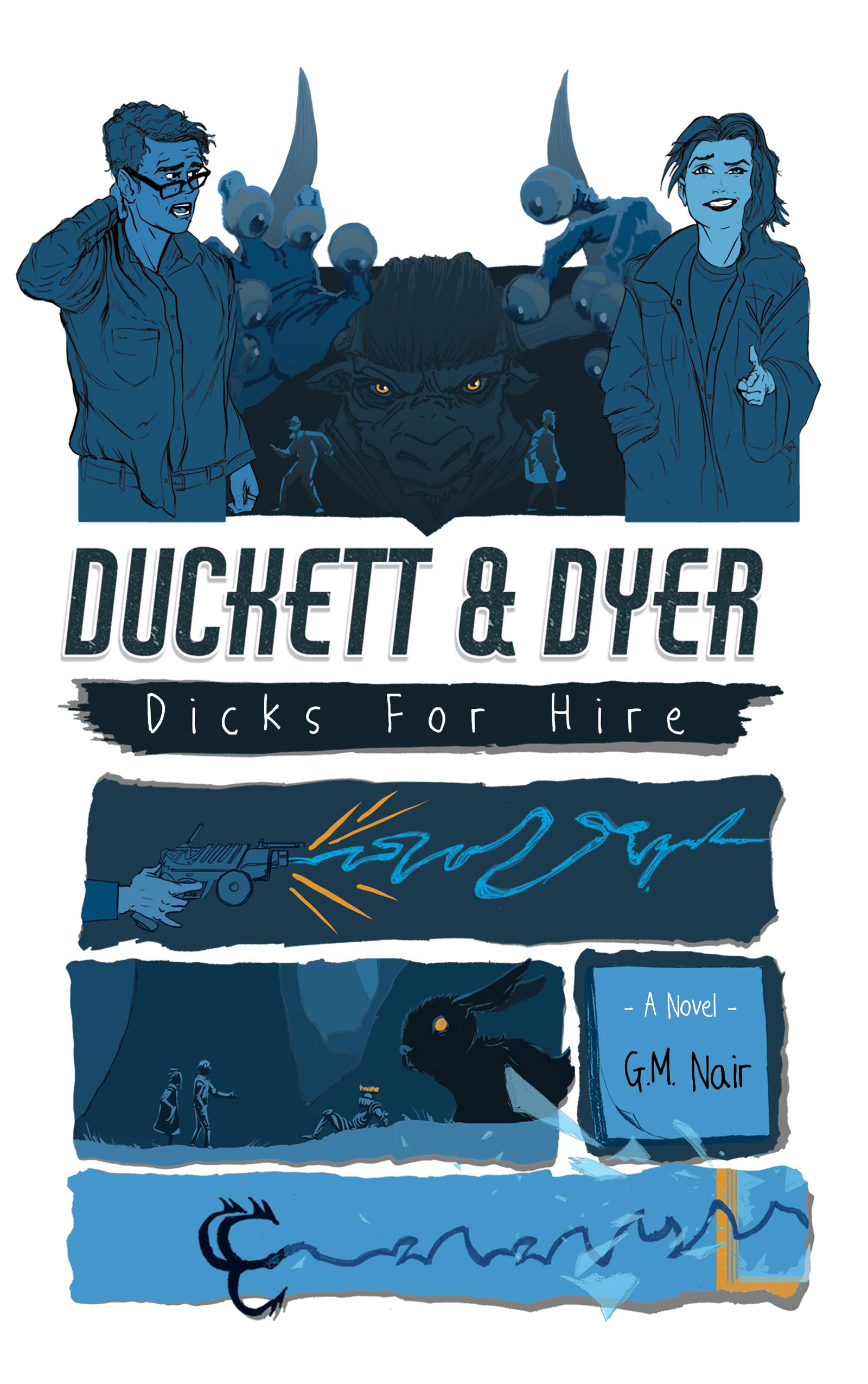 Michael Duckett is fed up with his life. His job is a drag, and his roommate and best friend of fifteen years, Stephanie Dyer, is only making him more anxious with her lazy irresponsibility. Things continue to escalate when they face the threat of imminent eviction from their palatial 5th floor walk-up and find that someone has been plastering ads all over the city for their Detective Agency.

The only problem is: they don’t have one of those.

Despite their baffling levels of incompetence, Stephanie eagerly pursues this crazy scheme and drags Michael, kicking and screaming, into the fray. Stumbling upon a web of missing people curiously linked by a sexually audacious theoretical physicist and his experiments with the fabric of space-time, the two of them find that they are way out of their depth. But unless Michael and Stephanie can put their personal issues aside and patch up the hole they tore in the multi-verse, the concept of existence itself may, ironically, cease to exist.

The blurb itself attracted me to this one, but Duckett & Dyer: Dicks for Hire is not the fantastically derivative Noir you expect – and I can confirm it’s as crazy as it sounds.

Take seminal TV show Quantum Leap, add a big dollop of theoretical physics, a cast of completely confused characters, a smidgin of blood and guts, and a soupçon of Douglas Adams. Mix generously, grab yourself a glass of something alcoholic and settle in for a crazy ride!

Michael Duckett and Stephanie Dyer are our heroes. Michael’s a worrier in a job he hates, anxiety-ridden and feeling completely lost at everything. Stephanie Dyer’s your original slacker, not taking responsibility for anything or anyone, doing (and saying) what she feels, when she feels it. And causing Michael no end of frustration.

The first third of the book is the setup – which, in all truth, I found a little trying. Michael seemed inept, whingey, and desperate. Stephanie, a damn annoying caricature.

But then it got interesting…

Michael and Stephanie find themselves jumping backwards and forwards in time through alternate universes.  And what universes they are! Forget the Marvel multi-verse – nothing can compete with Cow-headed men, huge (and hungry for blood) hamburgers, Fractal-world, post-cataclysm, apple-headed folk, giant rabbits and more. The author’s imagination is off the leash, running free, and coming for you. Ye gods, what a ride!

But, for all that’s good, there are some issues. I just didn’t find the main characters appealing. There is lots of ‘telling, not showing’ – you really don’t have to use your brain at all, everything’s there for you. There are issues with tense, issues with the visual descriptions and action breaks. And the Order of Adjectives has been mislaid, so some of the adjectives just sound wrong. All these dragged me out of the story and back to reality.

That said and bad bits aside, I enjoyed Duckett & Dyer: Dicks for Hire. The level of imaginative storytelling sucked me in like a portal, threw me down an imaginary hill, then picked me up, dusted me off a bit and handed me a drink.

Brace yourself for a wild ride!

G.M. Nair is a crazy person who should never be taken seriously. Despite possessing both a Bachelor’s and Master’s Degree in Aerospace Engineering and a job as an Aviation and Aerospace Consultant, he writes comedy for the stage and screen, and maintains the blog MakeMomMarvel.Com. Now he is making the leap into the highly un-lucrative field of independent book publishing.

Duckett & Dyer: Dicks For Hire is his first novel, and in a world with a fair and loving god, it would be his last. Alas, he tends to continue.

G.M. Nair lives in New York City and in a constant state of delusion.

If you’d like me to review your book, or want help via copyediting, proofreading, or a manuscript critique, just get in touch. 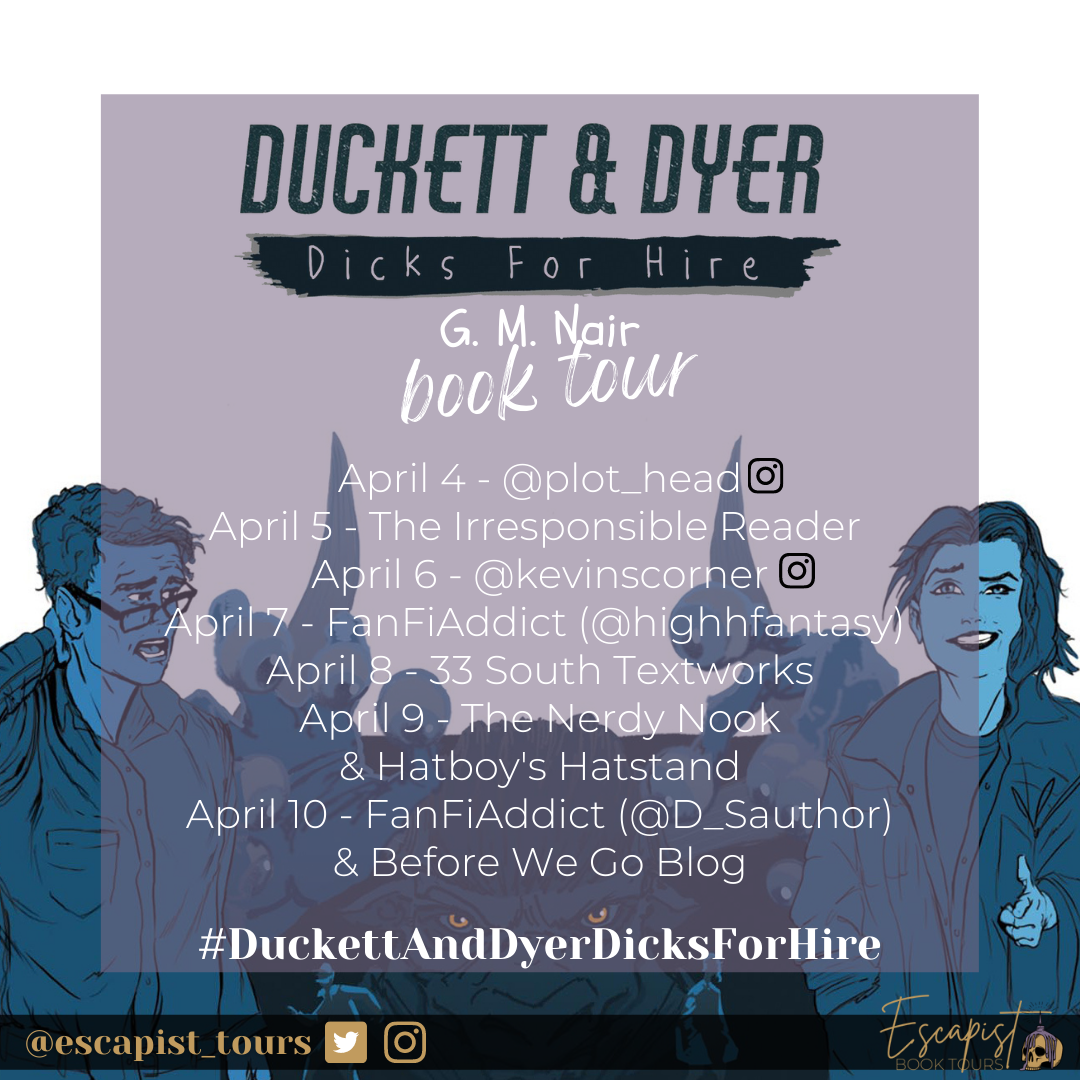