This review of Clanlands by Sam Heughan & Graham McTavish is because I’m an Outlander fan. There, I’ve said it. And I’m not going to start some controversy on which book/season/character is my favourite. And truly, when this book was announced, I thought about it for a good while.

I’m not fan enough to pay for the signed version, but I admire both the authors, love the subject, and the premise had me hooked from the beginning. I read the preview on Amazon, which made me chuckle. Then I saw the back cover, which consists of just two quotes from the authors:

“I admit, I have a childish obsession with tormenting Graham.” –  Sam Heughan 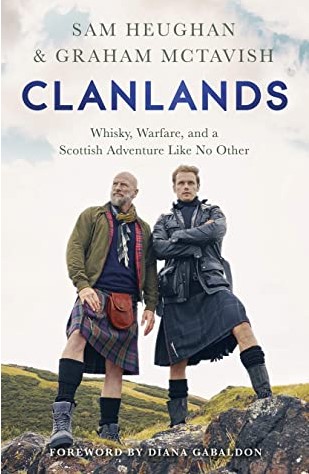 Two men. One country. And a lot of whisky.

As stars of Outlander, Sam and Graham eat, sleep and breathe the Highlands on this epic road trip around their homeland. They discover that the real thing is even greater than fiction.

Clanlands is the story of their journey. Armed with their trusty campervan and a sturdy friendship, these two Scotsmen are on the adventure of a lifetime to explore the majesty of Scotland. A wild ride by boat, kayak, bicycle and motorbike, they travel from coast to loch and peak to valley and delve into Scotland’s history and culture, from timeless poetry to bloody warfare.

With near-death experiences, many weeks in a confined space together, and a cast of unforgettable characters, Graham and Sam’s friendship matures like a fine Scotch. They reflect on their acting careers in film and theatre, find a new awestruck respect for their native country and, as with any good road trip, they even find themselves.

Hold onto your kilts… this is Scotland as you’ve never seen it before.

For those who don’t know, Sam & Graham went on a wee tour of Scotland in 2019. They filmed it for TV release in the near future, and also wrote this book about it. And, yes, I’m going to watch it. But, to the book… Published by Hodder & Stoughton in the UK, it’s a good looking hardcover. Damn attractive really! But I digress…

As much of a fan as I am, I got a little frustrated with the amount of personal acting history they relay in this book. It’s a book about Scotland and its history, not about a producer they worked with in the early 90s or how they got into acting. And I’m not that much of a fan that I really truly care about their personal histories… Sounds harsh, but there is a LOT of that. I’d rather have their impressions of the countryside, the people and Scotland itself.

There’s also not many photos to describe what they talk about. The photos are mostly ‘my life’ shots of their careers, with very few from this actual trip.

The relationship between these two is truly wonderful. Always ready to ‘take the piss’, they bounce off each other like the true friends they are. My personal catchphrase applies here: ‘Relentless, but never vindictive’. I can only imagine the laughter of an evening! Graham endlessly needles Sam’s need to take a stylist and makeup artist on the trip. Sam endlessly notes ‘Lady McTavish’s’ foibles – from constant food intake to the oft uttered ‘I’m not doing that’, Graham is a guy who knows what he wants and isn’t afraid to let others know.

Their true friendship and shared interest love of Scotland (now my home) brought them together for this project and it’s that friendship that shines throughout this book.

As for the history, to be honest there’s not much here that’s new to me – but I’m a history buff. A couple of things, though, had me ‘Hmm’-ing with interest.

And no one can deny that, like most Scots, they’re both born storytellers. Graham can turn a very nifty phrase (and is someone I’d love to have a drink with!) and, while Sam’s writing isn’t quite to the same standard, it does still stand on it’s own and I’ve read much (MUCH!) worse. All congrats to them both!

(Incidentally, the Clanlands audiobook is narrated by the authors. If you’re a MASSIVE fan, get the audiobook. I find audiobooks a little stilted, because they kind of have to be, and they never quite match the flow in my head. But, to each their own.)

Clanlands is not going to have any problems with sales – after all, Outlander fans will snap it up. And I’m not sorry I spent my hard-earned on it. I was giggling in places, (truthfully) a little bored in others, and enjoyed learning snippets of the history of my adopted land.

Bless them – but I finished this one hoping they’ll do more. There’s a whole lot of Scotland they didn’t get to!

Sam Heughan is an award-winning actor and philanthropist, best known for his starring role as Jamie Fraser in the hit TV show Outlander. From his early days at the Royal Court Theatre to his most recent role in the hit action film Bloodshot, Sam has enjoyed a career in theatre, television and film spanning almost two decades. With his growing success and fame, Sam has also lent his voice and platform to raise funds and awareness for many notable charities, including Marie Curie UK and Blood Cancer UK. In recent years he has raised over $5 million for blood cancer research, hospice care and testicular cancer awareness education. Due to his outstanding contribution to charitable endeavours and artistic success he was awarded honorary doctorates by the University of Glasgow and the University of Stirling in 2019.

Graham McTavish has been acting for over 35 years in theatre, film and television. On film and TV he is best known for his roles as Dougal MacKenzie in Outlander, the fierce dwarf, Dwalin, in The Hobbit trilogy, and AMC’s cult show Preacher as the Saint of Killers. He has performed in theatre all over the world from the Royal Court Theatre in London to the Metropolitan Museum of Art in New York. He is delighted that the dream of his 12-year-old self to be a published author has finally come true!

Like always, if you’d like me to review your book, just GET IN TOUCH  I post my reviews on my social media, Amazon UK and Goodreads.