Bothy Tales by John D Burns was an impulse purchase, based on my love of Scotland and the excellent reviews I’d seen. I’m very glad to say that it didn’t disappoint. 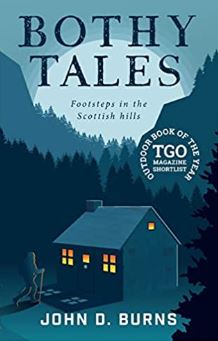 ‘I can move only with the aid of barrels of anti-inflammatory gel, sticking plasters and real ale anaesthetic. Martin and I descend from hours of walking to the small town of Middleton-in-Teesdale. I walk, stiff legged, into the campsite office and a plump, middle-aged woman looks up from her desk and can see the old timer is in trouble.
“Oh, what a shame you weren’t here last week,” she says, pity radiating from behind her horn-rimmed specs. “You’ve missed him.”
I look at her, puzzled.
“Elvis!” she explains. “You missed Elvis.”
Oh God, now I’m hallucinating.’

From remote glens deep in the Scottish Highlands, John D Burns brings a new volume of tales – some dramatic, some moving, some hilarious – from the isolated shelters mountain people call bothies.

Travel with Burns to secret places hidden amongst the British mountains and share his passion for the wonderful wildness of our uplands. Meet the vivid cast of characters who play their games there, from climbers with more balls than sense to a young man who doesn’t have the slightest idea what he’s letting himself in for…

I really enjoyed Bothy Tales.  Burns has such a lovely style, easy flow and a rich talent for adjectives that the read was over before I knew it. I was completely drawn in.

Burns practices escapism in it’s simplest form – hill walking. Getting out on your own, armed with a map, a compass and a stout pair of boots. (And often, as required in Scotland, a small bag of coal, a large bottle of whisky, some food and a sleeping bag.)

This book is filled with articles or essays and jumps around a little, but that doesn’t affect the cohesiveness. All the tales portray his sense of wonder at nature, and glee at his semi-retired state meaning he can go walking whenever he likes. Heartily jealous, John.

The stories mainly centre on the Cairngorms, though he does venture to the Cape of Wrath and down into Yorkshire/The Pennines. His descriptions of his fellow humans, the human condition and his despair of the technological world touch a nerve – he’s bang on, is John.

It’s very easy to see why Burns has won so many awards and hearts. His writing is funny, saturated with his love of nature, charming, insightful, and portrays a sense of peacefulness missing from the world right now.

Mr Burns has won another heart with me. A great pleasure to read.

Thanks, John. Thanks for reminding me there’s more to the world than my little flat – more than COVID-19, political disheartenment or feeling the lack of friends and family.

Originally from Merseyside, John moved to the capital of the Highlands, Inverness, over thirty years ago, to follow his passion for the hills. For over 40 years he has walked and climbed the hills of Scotland whilst also making occasional trips to more exotic location like the Alps, the Pyrenes and the Canadian Rockies.

An expert ice climber, he was also a member of the Cairngorm Mountain Rescue Team, and has taken part in numerous rescues in the Highlands. More recently he has rediscovered his love for remote bothies (isolated mountain shelters) and regularly visits the wilder places of his Scottish home.

John began writing almost 15 years ago, and at first found an outlet for his creativity as a performance poet. In 2002 he produced as collection of poetry, Wind Dancer, aimed at raising awareness of autism, a condition that affects one of John’s two children.